Women have a long-standing high level of political inequality in national legislatures in Ukraine. Despite that gender equality principles in national legislation should guarantee equal rights and opportunities in economic and political life to both men and women, some national policies may enhance gender stereotypes and hamper advancement of women’s rights. The former Soviet Union had ambiguous approach to gender equality, which despite encouraging women’s participation in some areas of economic life, kept their political influence very limited. According to data from the Inter Parliamentary Union, from 1991 to 2018, the share of women in the Ukrainian parliament never exceeded 12 per cent. 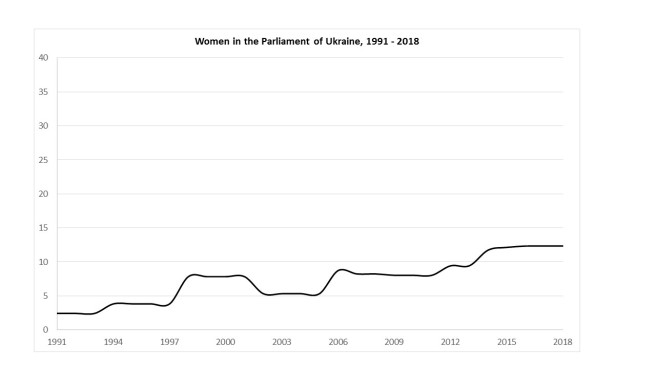 I argue that one of the reasons for enduring political inequality of women in Ukraine stems from the conservative views shared by political parties and parliamentarians. I have found that Ukrainian political parties and blocs have paid little or no attention to promotion of gender equality and women’s rights in their manifestos without talking against women.

The analysis of the party and block manifestos reveals that only five parties in the Ukrainian Rada over the span of 15 years have mentioned in their electoral documents gender equality or women’s rights. Family values, traditions, and motherhood in contrast appear 44 times. Support for the low income and large families as well as promotion of state assistance for the childbirth remains the main issue addressed in the electoral manifestos of the parties.

Similarly, I found that Ukrainian political parties and blocs, regardless of their ideological positions, pay much more attention to the defense of family values, traditions, and motherhood, while the questions of gender equality and women’s rights are lesser addressed. Out of 145 legislative acts identified through targeted search that concern women, 107 deal with family, children, childbirth and state aid for the large and low-income families, and four more promote childbirth increase. The more ideologically conservative is the Ukrainian party or bloc parliamentarians belong to, the more they are inclined to support such legislation with their votes. Parliamentarians mostly explain their decisions family related legislation by the low birthrate and difficult demographic situations. Overwhelmingly, the parliamentarians defend their positions by pointing out the need to support traditional families. Many insist that women should have as many children as possible to solve Ukrainian ‘demographic crisis’, others insist on the teleological arguments, highlighting that motherhood is either a ‘purpose’ of women, or a debt to the society. Others reject the very notion of ‘gender’ perceiving it, along with homosexuality, as a part of alien Western values that they consider to be detrimental for Ukrainian society.

The pattern of supporting the image of women-mothers and child-minders persists overtime and is vocalized by the parties and blocs of otherwise polar political positions and originating in various parts of the country. In contrast, gender egalitarian positions have not received wide popularity in electoral manifestos, legislation, or debates. Economic reasons and traditions largely dictate the persistence of the overall trend of the promotion of women’s roles as mothers and child-minders. In many instances, parliamentarians support such trends invoking a conservative view of what is beneficial for women without intention to discriminate against them. However, these conservative views apparently reinforce a belief of connection between gender and homosexuality, which many parliamentarians fiercely oppose and address in dismissive manner or with negative comments. Nonetheless, there are many liberal parliamentarians who support equality of genders and sexualities and vocalize their opinion during the debates. Frequently such speakers are women.