Katerina Vrablikova, of the University of Bath, UK, recently presented a paper, “Economic Hardship, Politicization and Protest in Western Democracies,” at the Politics and Inequality conference held in Warsaw, Poland.

Since Fall 2018, Kateřina Vráblíková has been a senior lecturer in Politics at the Department of Politics, Languages and International Studies at the University of Bath. During Spring 2019, she is also an Istvan Deak Visiting Assistant Professor of Political Science at Columbia University. She does research on social movements, political participation, political attitudes and culture, and democracy. Her book, What Kind of Democracy? Participation, Inclusiveness and Contestation was published by Routledge in 2017.

We asked Katerina Vrablikova for an extended abstract of her Politics and Inequality conference paper and, via email, some questions about her research. We are thankful for her positive and detailed response.

How and why does economic crisis and similar situations trigger protest of poor? The paper argues that in addition to the expansion of the pool of deprived people, who can potentially protest (composition mechanism), events like the Economic crisis also provide a supportive political environment for political mobilization of socio-economically excluded groups (mobilization mechanism). As potentially very threatening and unpredictable event, economic crisis can skyrocket the salience of the economic problems in national politics. This opens space for the re-definition of economic issues and identities and for political mobilization of socio-economically deprived people, who, under normal circumstances do not participate much because they lack resources necessary for participation. Typically, protest attracts relatively resourceful and financially secure people, who get active around a variety of issues that are not directly related to their personal situation, such as environmental, anti-war, women’s rights, anti-corruption mobilizations. Protest of socio-economically deprived people is different. It is motivated by the personal experience of bad socio-economic conditions that becomes a purpose of mobilization and tales place despite the lack of individual resources. The article uses data from four waves of European Social Survey that are combined with macro-economic data and aggregated survey data (Eurobarometer) on public concern about national economy (percentage of people saying that the economic situation is very bad). The results show that poor people were most likely to protest in times of the Economic crisis in countries where the economic problems raised a very high concern. In the period before the Great Recession and in countries where economic problems were not recognized as severe and salient, poor people are much less likely to protest. In this special situation of economic crisis, poor thus get mobilized and join the better-off protesters, who are the usual suspects at ordinary protests that get mobilized by salient issues also during normal times.

The research you presented at the Politics and Inequality conference was on the economic crisis and protest. How did you get interested in this topic? And how is this topic connected to other research that you are doing?

In summer 2012, the Czech Republic experienced relatively high level of anti-austerity protest. That time I just defended my dissertation on non-electoral participation and worked at the Czech Academy of Sciences. I was asked in a radio interview about the causes of such unusually high protest mobilization and I, in fact, was not able to tell much in reply. Because, normally, we would say that it is more resourceful people and people with post-materialist values, who usually participate in politics more, including protest. These protests, however, did not seem to fit to this “privileged postmaterialist protester” story. For instance, an anti-Roma march in a Czech regional capital (in fact one that I come from) was the largest collective mobilization in the city since the 1989 revolution and, according to observers, the participants included a handful of rightwing extremists and low-income and low-educated Czechs. The profile of participants thus corresponded to old social movement theories that expect socio-economic grievances to trigger protest and that were considered disapproved in mainstream political participation and social movement literature. So, I followed this up and read more about the role of mobilizing grievances. It turned out that political context might play an important role in activation of the relatively unusual grievance participatory mechanismAnd this point very well fitted to my general interest in how political environment shapes citizens’ activism and preferences. In my other research, I have examined the role of political institutions and political culture on individual non-electoral participation.

What is most challenging about accounting for economic crisis on protest, and why?

I would say that the most challenging aspect is the rareness of the studied phenomena as it brings challenges for the empirical analysis. Economic crisis is exceptional; it is a very unusual short-term event that is rare compared to the “normal” times. The same applies to the outcome – protest. Taken from the perspective of national populations, individual protest is relatively rare. On average, only around 5 percent of people say that they took part in a demonstration in last year. Given that socio-economically deprived protestors form a small portion of all protestors, the numbers decrease even further. Having too few positive cases is challenging for quantitative analysis.

What surprised you most about your research on crisis and protest?

What struck me the most was the way how material indicators of economic crisis are differently related to people’s evaluations of the economic crisis across different countries and before and after the crisis. For instance, Estonia and Slovenia were both badly hit by the recent economic crisis but the evaluation of the economic situation by the public was very different in these two countries. While in Slovenia around 70 % of people assessed the employment situation in the country as very bad, the share in Estonia did not go over 40 % even in the worst period of the crisis. And let’s not forget that, in addition, the crisis still hit Estonia much strongly that it did Slovenia.

Imagine that you only have a minute or two to tell someone about your paper. What is the main message of your paper that you want people to remember?

What I’d want people to remember is that politics matters, i.e. the way how political issues are framed at the collective level, made salient or silenced and mobilized stands in between economic structure and political outcomes. Economic crisis triggers protest of poor not only by putting a greater amount of people into economically difficult position but also by politicization of the economic problems in national public opinion. Poor people were more likely to protest in countries where economic problems were recognized as severe and salient by a greater number of people than in countries where people were less concerned with economic issues. Importantly, the public concern about economic problems did not need to overlap with material and objectively existing economic problems of the country. This is what I explained in the answer to the previous question.

What’s the next step for your research on this topic?

The politicization of economic problems that should capture the discursive dimension of economic crisis could be measured better than it is in the current study. In the current study, I only assume that the source of the mismatch between objective economic problems of the country and negative economic evaluation in public opinion is politics: discourse and mobilization of political elites and media. I’m planning on strengthening this part focused on public discourse and framing of crisis.

Together with other colleagues, we are planning a research project that will examine threat discourse in the public sphere of European democracies and will study its effects on political views and behavior of ordinary citizens. We will use machine learning to analyze threat discourse related to economic crisis or refugees used in major national newspapers in European democracies since 2006 and will combine this data with existing comparative public opinion surveys.

Please list two of your recent favorite articles or books in the field of politics and inequality, and why you chose them.

I will put on the list Mikael Persson’s article “Is the Effect of Education on Voter Turnout Absolute or Relative? A Multi-Level Analysis of 37 Countries” (published in Journal of Elections, Public Opinion and Parties in 2013) because of its clever application of comparative perspective to the study of individual-level mechanisms. Most studies suggested that higher education increases political participation directly as an absolute resource that fosters people’s cognitive capacity to participate. However, as Persson notices, if this was true, we should have seen an increase in voter turnout in last decades and not a decline that actually happened as more people got more educated during this time. Persson explains that higher education increases participation because it connects people to a more politicized social status network and increases their chances to be recruited and not because it is an individual resource.

What’s an older article or book in the field of politics and inequality that you like, and why?

Piven’s and Cloward’s Poor People’s Movements: Why They Succeed, How They Fail (Vintage, 1977) is one of the most significant works in the field of political activism and inequality for me. In addition to other important points that the book makes, I particularly like their emphasis on the role of economic and political crisis for the protest mobilization of poor and social welfare policy making. This book explains why socio-economically disadvantaged people usually do not participate but that they can be mobilized to protest and be politically successful under exceptional circumstances when crisis disrupts the status quo of political and economic structures. 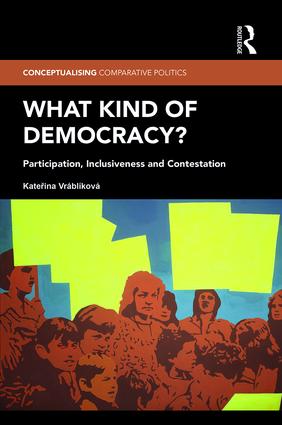 “A highly needed and very original contribution to our understanding of cross-national variations in political participation. The sophisticated empirical analyses of the interplay between individual, institutional, and cultural factors are just as convincing as Vráblíková’s thoughtful discussions of the implications for normative democratic theories.”

The interview was conducted via email by Joshua K. Dubrow, who also edited this piece, including the embedding of web links. This work was funded in part by the National Science Centre, Poland (2016/23/B/HS6/03916).